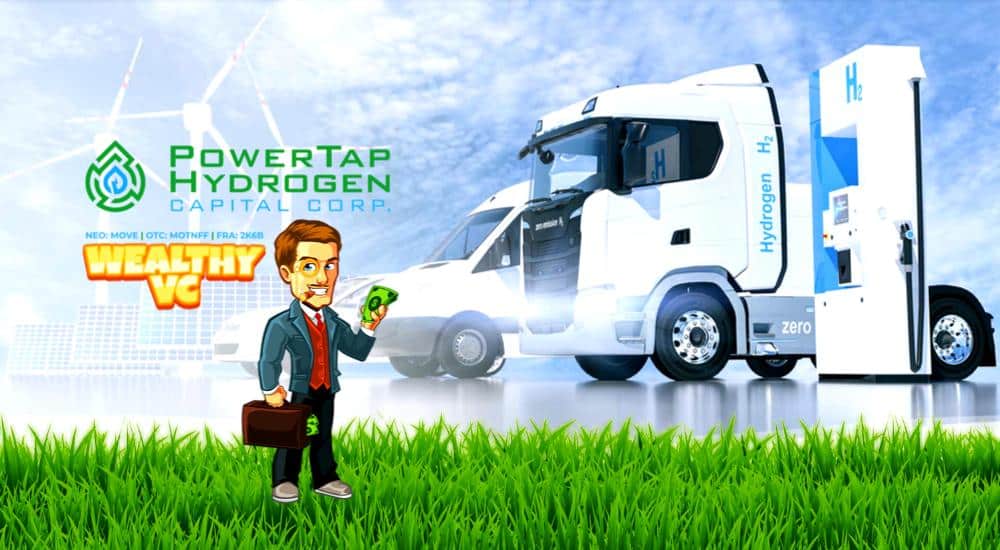 PowerTap Hydrogen Announced That it Acquired a 49% Stake in AES-100, a Leading Green Hydrogen Technology Company and Owner of the IP and Exclusive Rights to the Advanced Electrolyzer System (AES)

The Substantial H2 Cost Savings Generated By the AES System Could Greatly Accelerate the Adoption of Hydrogen Technology, and in Process, Propel CleanTech Sectors Such as Fuel Cell Vehicles and Renewable Energy to Grow Exponentially

PowerTap Hydrogen (NEO: MOVE) (OTC: MOTNF) (FRA: 2K6A), previously known as Clean Power Capital, announced recently that it acquired 49% of the green hydrogen technology company AES-100 Inc. AES-100 owns the exclusive rights and all the intellectual property related to the Advanced Electrolyzer System (AES), a novel electrochemical technology designed to selectively recover high purity hydrogen from dilute syngas streams. Invented by Pinakin Patel and his team at T2M Global as a solution to the problem of trapped hydrogen in dilute syngas streams which would end up being wasted on low-value applications.

The AES system’s proprietary technology allows for hydrogen production at a greatly reduced cost, with zero greenhouse gas emissions. The ability to economically extract high purity, clean hydrogen from gas streams commonly produced by carbon-intensive processes and containing contaminants such as carbon monoxide, carbon dioxide or methane, presents great potential to drive lower emissions footprints for many industrial processes while unlocking more hydrogen to fuel a cleaner global energy system. As the only technology of its kind capable of producing high purity green hydrogen at a competitive cost, the AES system targets <$5 per kg H2. Compared to the market’s current going rate of approximately $10-15 per kg of H2, the AES system is capable of producing H2 at a significantly lower cost. As a result, the substantial H2 cost savings generated by the AES system could greatly accelerate the adoption of hydrogen technology, which in turn, would very likely lead to exponential growth in sectors such as fuel cell vehicles and renewable energy.

The world is moving steadily towards rapid decarbonization, with governments worldwide setting new climate aspirations that are even more ambitious than those expressed in the Paris Agreement. To achieve these goals, hydrogen is anticipated to play a central role in the energy, industrial and transportations sectors. Green technologies, such as AES-100 hold the key to unlocking the volumes required to catalyze mass adoption of fuel cells and clean energy alternatives to the current carbon-heavy energy sources.

The company anticipates considerable synergies between its PowerTap Hydrogen Fueling SMR technology and the AES system, with AES complementing PowerTap’s SMR via the provision of syngas. PowerTap believes this could broaden the pool of feedstock required to produce hydrogen to include biomass in addition to natural gas and renewable natural gas.

“The advanced electrolyzer technology produces hydrogen at the lowest energy consumption while making capture of CO2 easier at dramatically reduced capital investments. The solid-state technology is virtually maintenance-free, making it very attractive for hydrogen infrastructure. It can produce hydrogen from a variety of syngas sources for greater market penetration worldwide.” 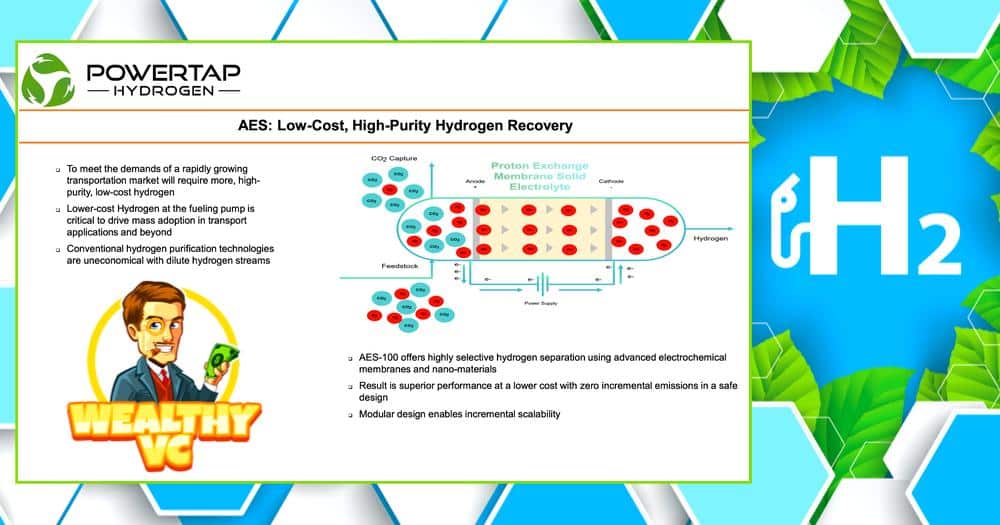 Trending: PowerTap – If You Build It, They Will Pay

Recognized globally as a leader in the hydrogen and fuel cell technologies industry, Pinakin Patel has over four decades of experience in the clean energy space. In addition, Mr. Patel also holds 30+ patents and has received more than $500 million in funding for R&D for projects around the world. For his efforts, Mr. Patel has received many prestigious awards from prominent institutions, including the U.S. Department of Energy, the State of Connecticut, the ASME and the Electrochemical Society.

Over the course of his career, Mr. Patel has supported dozens of start-ups in the alternate energy sector through strategic alliance and funding development. As a result, Mr. Patel produced a very successful track record with many multi-national sponsors, such as BASF (FRA: BAS) (OTCQX: BASFY), Sempra (NYSE: SRE), ExxonMobil (NYSE: XOM), EPRI, NASA, CARB, CEC and Canada-SDTC.

In exchange for a 49% stake in AES-100, PowerTap issued AES shareholders 20 million shares on a pro-rata basis. Also, a finders fee of 2 million common shares was paid by PowerTap upon the closing of the deal. Both the acquisition shares and the finder’s shares will have a deemed value of $1 per share and are subject to a hold period of four months. The acquisition of AES-100 will not lead to a change in control of PowerTap Capital.

No change of control of PowerTap will result from the Acquisition.