Bruce Linton, Founder and Former CEO of Canopy Growth and Early Investor and Advisor to MindMed, is Expected to Join the New Combined Company as the Non-Executive Chairman of The HighBrid Lab’s Board of Directors

As cannabis has become more and more mainstream, there is a growing appetite for legalizing other substances and bringing them to market for medical use. One group of drugs gaining traction in the U.S. and Canada are psychedelics. Every few months, it seems, there is a new study showing that drugs like psilocybin (magic mushrooms), MDMA (ecstasy) and ketamine have real and potentially groundbreaking medical benefits in treating ailments like addiction, PTSD and a host of other mental disorders.

Lawmakers are beginning to come around to the idea of certain psychedelics taking the route of legalizing MMJ: start at the local/state level and build support to push the federal government to follow along. The biggest domino to fall thus far was the state of Oregon decriminalizing psilocybin and legalizing it for medical use. Kevin Matthews, one of the leading figures behind Denver decriminalizing magic mushrooms, thinks the future is bright for psychedelics:

“We’re in the middle of the psychedelic renaissance. I think it’s becoming more common because the results—at least the initial results from these studies—are so powerful.”

As the opportunity for bringing psychedelics to market expands, so too does the interest of investors and entrepreneurs, especially among veterans of the legal pot industry. For example, Bruce Linton, the founder of Canadian weed giant Canopy Growth (TSX: WEED) (NASDAQ: CGC) (FRA: 11L1), has been one of the main drivers of the nascent psychedelics industry. After departing Canopy, Linton went on to join the board of directors at MindMed (NEO: MMED) (NASDAQ: MNMD) (FRA: MMQ), a contender for the top psychedelic company in the world.

Most recently, Linton joined the Board of Directors at the newly formed The HighBrid Lab. The HighBrid Lab is the name of the company formed as a result of the merger between Creso Pharma (ASX: CPH) (OTC: COPHF) (FRA: 1X8), a global MMJ company based out of Australia, and Red Light Holland (CSE: TRIP) (OTC: TRUFF) (FRA: 4YX), a supplier of legal magic mushrooms to the Netherlands.

Commenting on the game-changing merger, Linton had this to say:

“Having worked with both the Creso Pharma and Red Light Holland teams closely in the past, I am really excited by the potential this combination brings. As a merged company, The HighBrid Lab has access to four of the highest growth industry segments around, and the team, board and advisory group to make real progress within these verticals. I’m really looking forward to rolling up my sleeves and helping The HighBrid Lab get to work!”

As the name implies, The Highbrid Lab will combine Creso Pharma’s global network and deep pharmaceutical expertise with Red Light Holland’s access to one of the world’s only legal psychedelic mushroom markets. As a result, the newly formed company will seek to become the preeminent global supplier of high-quality MMJ and psychedelic products. 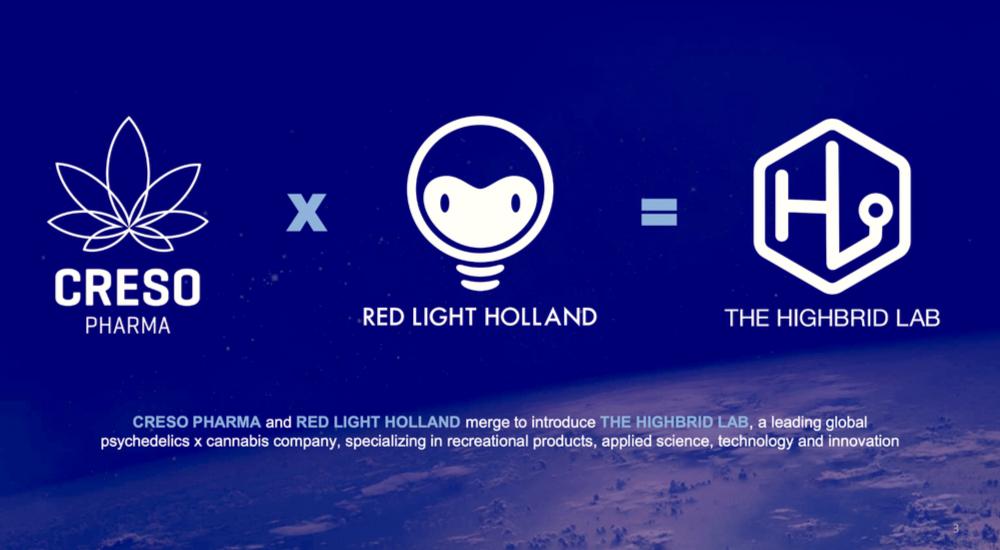 The goal at Creso Pharma (ASX: CPH) (OTC: COPHF) (FRA: 1X8) has been to market MMJ products on a global scale. Their flagship brand, cannaQIX, comprises MMJ-infused products across various sectors, including therapeutics, nutraceuticals, animal health and cosmetics. The products are designed to provide users with maximum bioavailability, allowing more active ingredients to enter the body than other forms of delivery. The brand has perhaps the furthest reach of any MMJ brand, with products available in North America, Europe, the Middle East and Southeast Asia.

Creso Pharma also sells high-THC products, including flower, pre-rolls and hashish, to Canadian medical consumers. These products and non-THC products are produced at the company’s flagship cultivation and manufacturing facility in Nova Scotia, Canada.  The GMP-certified facility is capable of supplying both the Canadian market, as well as export to the EU.

Creso Pharma’s Chairman of the Board, Adam Blumenthal, commented on the synergies between the two companies:

“We are very excited to have entered into this agreement with Red Light Holland and to create a company that has the potential to become a world-leading psychedelic, CBD and recreational and medicinal cannabis company…There are a number of synergies across the businesses, which will allow the Combined Company to considerably scale up operations in the near term. Red Light’s CSE-listed vehicle will allow the Combined Company to enter the lucrative US market, and we anticipate that product sales through our recreational cannabis and CBD subsidiaries will scale up significantly in the short term, underpinning early cash generation and provide additional financial flexibility across the business.”

Red Light Holland (CSE: TRIP) (OTC: TRUFF) (FRA: 4YX) claim to fame is its iMicrodose kit and app.  iMicrodose is meant to facilitate the microdosing of psilocybin mushrooms (truffles in the local parlance) while also providing users with an online platform to discuss their microdosing experiences with other users.

The company has begun construction of its future GMP-certified manufacturing facility in the Netherlands, where it will produce the iMicrodose. While distribution is initially limited to the Netherlands, the centralized location of the country will allow for the export throughout the EU, should the rest of the continent catch up on psychedelic laws.

Commenting on the merger and how he believes Red Light will benefit, company CEO Todd Shapiro said the following:

“Red Light Holland has significant capital and expertise and is motivated for growth. The company understands the sensitive complexities of the ingredients we deal with while ensuring we continue to make a bold yet careful push to provide and increase access for immediate revenue generation and brand expansion…Merging with Creso Pharma, who also has significant cash on hand, and formulating The HighBrid Lab, with Bruce Linton as Chair of the Board, means we can expand our premium product offerings globally in the high growth CBD, THC and psychedelic sectors.”

Combining Creso Pharma and Red Light Holland will result in many attractive synergies for the new company. Foremost is the listing on the CSE;  this upgrade to the CSE provides The HighBrid Lab with a much greater pool of potential investors, which management plans to utilize to raise funds needed for expansion. Funding is expected to be used to enter the U.S. MMJ market via a near-term acquisition, expand market share in Canada for Creso Pharma’s existing products, introduce cannabis-based Red Light Holland microdosing products and increase psychedelic R&D at pending acquisition targets.

CEO & Director – Todd Shapiro: Currently the CEO and co-founder of Red Light Holland, Mr. Shapiro will fill the same role at The HighBrid Lab. Before Red Light Holland, Todd was a well-known on-air radio personality and brand ambassador. His infectious personality and ability to sell a brand should serve the company well as it seeks to enter new markets and introduce new products.

Non-Executive Chairman of the Board – Bruce Linton: Perhaps the most famous of the early veterans of the Canadian cannabis industry, Bruce is a highly successful and prolific entrepreneur. He co-founded what would become Canopy Growth, the largest cannabis company in Canada. Currently, Mr. Linton holds executive and board positions at several companies operating in MMJ, psychedelic and tech industries. His ability to raise capital and get companies started on the way to explosive growth is well-documented.

Executive VP & Chief Strategy Officer – William Lay: Mr. Lay previously served as the Associate Director of Mergers & Acquisitions at Canopy Growth. He was involved in over C$5 billion in M&A transactions. His extensive experience in business combinations will prove vital not only to the creation of The Highbrid Lab. Still, it will serve the company well in its pursuit of acquiring an interest in the U.S. pot industry.

Management has laid out four verticals they will pursue as a consolidated company:

The legal and moral objections to both MMJ and psychedelics are falling by the wayside at a rate that puts Earth on a course for near-global legalization in the not-too-distant future. The race for companies to get out ahead of this ever-expanding opportunity is in full force, and The HighBrid Lab is leading the way. Their deep expertise in branding should lead to consumers resonating with the products. At the same time, their dedication to science should allow them to develop life-changing medications for disorders that affect hundreds of millions of people worldwide.

Creso Pharma is a paid client of Wealthy VC. Wealthy VC does not hold a position in CPH.

This Company’s Hydrogen at the Pump Technology i